A downloadable game for Windows

Flitspire is a Tower-Climbing Action-Platformer for PC. Players use the power of flight combined with an assortment of random weapons to fly to the top of the Tower as fast as possible.

You play as Towa, a small Vampire Lord who inherited the responsibility of looking after the Tower from his family. Alas though, his younger, nuisance of a sister has kicked him off the top of the Tower all the way down to the bottom and taken ownership of it herself. You have to get back to the top and reclaim it before it's too late!

As a Vampire, Towa has the ability to fly in short bursts (no turning into a bat nonsense here!). Use Towa's flight ability to fly up the Tower fast! But, be wary as he can only fly for a short period of time before becoming exhausted. When that happens just quickly land on a platform to reset the flight meter and you're good to go again! Managing your flight meter is important and knowing when you can push yourself to reach a platform can make all the difference. The Tower features many different flight paths to approach; some simple but slow, and some treacherous but rewarding. Which path you choose is up to you! Fly Fast, Fly Smart.

Alongside the ability to fly, Towa is able to use a variety of different weapons. These weapons are kept inside of Dragacha Machines.

Dragacha Machines are weapon caches that can be found inside the Tower's break rooms. Towa can use each machine by inserting 500 coins. For each 500 coins inserted, the Dragacha Machine will drop a random weapon for Towa to use. Each weapon is different and offers up a different gameplay style. Try to master them all to get the best out of your run. You can gather coins by collecting them throughout each stage or by gathering the change enemies drop after being defeated.

*This demo features 5 different weapons for you to use and master, the final game has around 20 planned.

Flitspire is a game all about getting faster and faster. For each run through a timer will keep track of how fast you complete each stage, with your final score being your overall time at the end. You can see your current time displayed on the wall in each break room.

Do you farm enemies for gold to have more chances at getting a better weapon? Or do you stick with what you have and just fly as fast as possible to the top? How you approach each stage is up to you and it's for you to decide the best plan of action. Each stage is static. Hazards and platforms will not change, but what enemies appear and where is random (they like to take turns and have to go out for pizza sometimes). So, whilst stages may become familiar always stay vigilant!

*As of current there is no leader-board feature in this demo, but this is something being considered for a final version of the game. You can however just use "Print Screen" to take a screen of the game and save the final time. Please share them!

Flitspire is currently a game in development. You can follow @LiamBME for future announcements and updates about the game's progress; you can also shout your feedback and thoughts on the game there.

Q. What are the controls?
There is an in-game menu option that allows you to see the controls. You can also see them here:
A - Move Left
D - Move Right
J   - Interact (Doors, Machines, NPCs, Menus)
K - Attack
L - Fly

Q. Can I use a controller?
Yes! Flitspire is compatible with Microsoft supported controllers such as the Xbox One and Xbox 360 Pads:
X Button - Interact  (Doors, Machines, NPCs, Menus)
A Button  - Fly
B Button - Attack

Q. I can only use the D-Pad on the controller, what's that all about?
When I make games I try to make them as simple as possible. Flitspire is heavily inspired by the fast and simple action of the game, Downwell. I aimed for a Gameboy-esque control scheme hence why you control Toa by pressing Left or Right on the D-Pad.

Q. I found a bug/issue in game, how can I tell you about it?
Nice work! You can hit me up on Twitter @LiamBME or send me an email at:
finalgamespodcast@gmail.com

Q. How can I support development of this game?
This demo is a small slice of what's currently planned for a final version of the game, it demonstrates the main aspects of the gameplay and also how it will be structured. Whilst there are no solid firm plans right now to go ahead and develop the final game (making games is hard as one person and expensive), if you enjoy this demo please let me know and also consider supporting further development by donating some money when picking up this demo. I would love to create a final version of Flitspire, creating what I have so far has been so much fun.

Q. This music is funky, how I can I check out who did this?
I know right? It's done by the wonderful Craig Windle who goes by the handle, Windmills at Dawn.

Thank you so much for playing Flitspire! If you enjoyed this demo, please share it with your friends and on the internet :)

Unfortunately not :(
I appreciate you asking and showing interest though!

good game design, could find some bugs though..

It's really good! I'd be saying that even if I stumbled upon this without knowing about the podcast. Speaking of which, the episode where Liam talks through the making of this was great to listen to, I can certainly relate to a lot of it. Anyway, here's a video with my first impressions:

Hey Liam! I'm a big fan of the Dad & Sons podcast! This was a fun demo and I'm looking forward to more! I made a video with my thoughts and commentary on it! Keep up the great work!

Hey!
Thanks so much for this, I watched through the whole video it was so much fun to watch! I'm glad you enjoyed your time with it and I'll definitely try to find a way to incorporate "Spaghetti" into the lore somehow haha. I'll pass along your comments to Matt and Gorg too about the show! Really appreciate this, thank you :)

Oh also! Little tip ;) - You can hit the spikes that fall in the boss room towards him and they deal damage to him. It's tricky, but try it!

Oh awesome! That adds a whole new layer to the fight!

Really fun game, the artwork was decent and I love the theming. I felt like it could of used some more level randomization instead of just the weapons being random to increase the replayability. Really fun game, good luck on the finished version.

Thanks so much for checking it out! :) I'm glad you enjoyed your time with it!
The game did start out with procedual generation for the level building, but the problem with that is - because I want players to head up the tower fast they have to be able to semi-predict what is coming ahead of them. With full random, no one could ever tell what would appear up top which makes players overly cautious and slow, by having static designed levels it allows players to get better and better and make a mental map of where everything is coming. This leads to faster times and faster (more fulfilling) gameplay! However, the enemy placement and which enemy and also how many appear is all totally random! 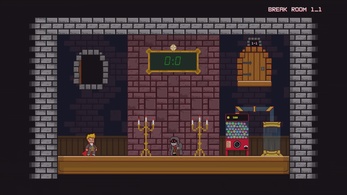 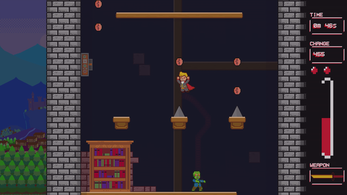 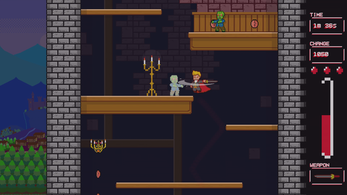 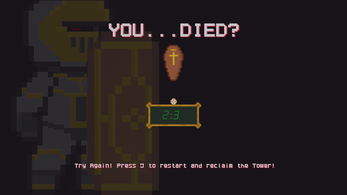 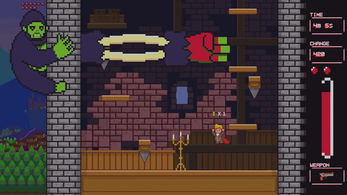 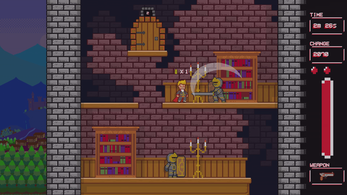 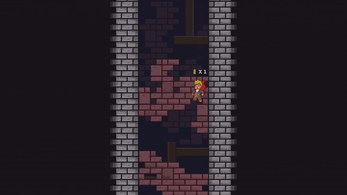 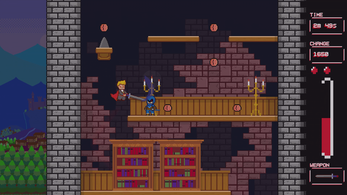 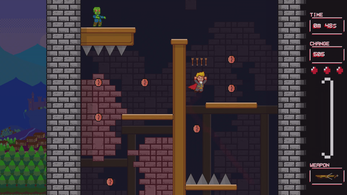 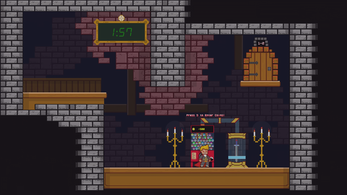 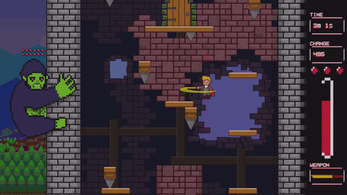 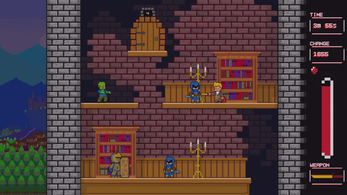